Posted on September 25, 2014 by pinoyhalfmiler

The cover of The Filipino Athlete Magazine, May 1951 edition featuring high jumper Andres Franco and the basketball team led by “The Fox” and “The Big Difference”.

Two (2) days before the start of the athletics program at the 2014 Asian games, let’s travel in time and review the Philippines’ s performance during the 1st Asian Games in 1951.

The games were rightfully held in New Delhi, India, the land of Mr. G.D. Sondhi, the person who really pushed for the realization of the quadrennial meet. The same breathe as the efforts of Baron Pierre de Coubertin who’s efforts yielded the Modern Olympics in 1896.

The track and field team brought home four (4) medals with a 1-0-3, gold-silver-bronze tally. The following were the medalists:

Below were the performances of the rest of the track and field team: 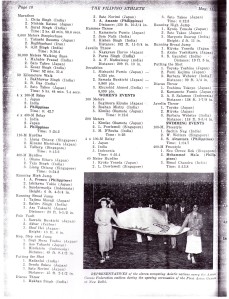 At swimming, 7 of the 8 SWIMMERS brought home individual medals, with the 8th member, had 2 medals at the relays.  Mohammed Mala was the most bemedalled with 3 individual medals and 1 relay.  Below are the performances of our athletes:

Total medal haul of the swimming team was 3-5-4. 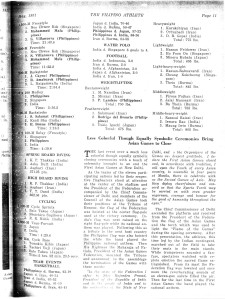 Total medal haul of the Philippines was 5-6-8.  Below was the final standings of the countries (courrtesy of Wikipedia) participated in the 1951 games:

Note: Bronze medals were not awarded in the water polo and team pursuit at cycling.