The DLSU Men’s team is highly expected to sweep gold in all four of the jump events at the UAAP. Such is the dominant lineup of DLSU they are expected to win six of the eight jumping events up for grabs.

A resurge in junior the Pole Vault by the athletes of Mike Pelaez, a UAAP Record Holder in the High Jump and a rookie in the Long/Triple Jump from Bacolod make up The DLSU new power lineup in the jumps.

Arguably the sharpest rookie La Salle has recruited will be Adel Valdecenas of Green Hills a proud member of the Mike Pelaez Family (MPF name given to athletes coached by Mike Pelaez). Valdecenas is the Palarong Pambansa record holder and last year in Hong Kong improved his best leap to 4.30m (which is the #2 best jump of all time by a Junior Eduardo Lasquette having jumped 4.89m over 20 years ago). Coincidence that Valdecenas personal best is good enough to tie the UAAP Record of Jerome Margallo (Adamson University) set back in 2006.

Chasing Valdecenas for the minor medals will be defending champion Abdillah Landasan of FEU who after an absence and now reinstated back in the FEU team is unlikely to defend his title where he won in 4.00m. Valdecenas team mate and training partner JK Sugue who finished 2nd last year with a pb of 4.00m and actually defeated him at the National Open in 2010 and also EJ Valera of Ateneo (the younger brother of Zekky ‘Boy’ Valera the 2010 UAAP Champion) who also improved his best to 4.00m this year.
Smith or Baron?

With the womens pole vault being ruled by Ateneo Mika Santos, then FEU Buenaventura and lately by the duo of Bettina Macalang and Jam Garcia Valenton. The colors of this event have shifted back to other teams. With Macalang opting out of the UAAP the stage is set for DLSU Jumper Alexandra Smith, not since over a decade has DLSU had a champion with the last notable ones being Jesber ‘Jingle’ Hualde and Ana Natad.

Smith another member of the illustrious MPF set a string of junior records in the womens pole vault eventually the drama reaching an end with her jumping 2.87m in Capiz. But however when the dust settled it was UP team mate and newcomer Kat Baron who had leapt a 2.90m leap 5 days later at the weekly relays to claim sole ownership of the National Junior Record. Perhaps a chance for UP to claim there first ever title in this event. The two continue there rivalry during the UAAP perhaps now the drive to see who can get to the 3 meter mark first. 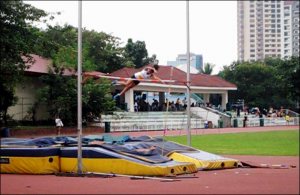 Smith in action during the 2010 PATAFA Weekly Relays

One of the most impressive seens of the UAAP last year was the post game war dance of Andrew Wilson upon clearing a new UAAP Record of 2.03m. He shattered the existing 1.97m mark set by fellow La Sallian Isagani Bayson. Wilson first clearing 2.00m and then asking the bar raised to 2.03m. Wilson is a foreign student at DLSU and also a part time male model he is one of the top 3 high jumpers in the country with Lasangue and Capispan all three having jumped over 2m a feat never achieved in the Philippines before with 3 jumpers over 2m. Wilson may have it easy with the other two not part of the UAAP.  ‘The Bromance’ is certain to win his event but can he jump 2.05m? and push his way further up the Philippine all time ranking list. 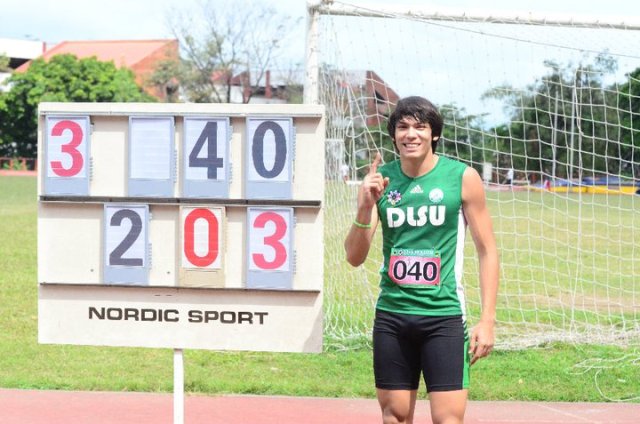 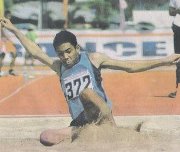 Doloso of DLSU who also comes from the RV Alvarez stable, also had a very marginal win last year in the Triple Jump with an 11.86m to 11.85m win over UE Aleah Gatmaitan. Doloso who leapt a personal best of 12.23m to set the Palaro Record back in 2010, has not had any similar form until recently when she cleared 12.00m to win the Uni Games in Capiz last October. Challenging her will be Gatmaitan and UST Luville Dato-on who has a personal best of 11.89m (2008) , also strong for the minor medals will be UST recruit and palaro stand out Michelle Palmares who has a best leap of 11.70m.

UST Dato-on is one of the medals expected not to goto DLSU. With a personal best of 5.83m (2010) which puts her well ahead of her rivals. Could it be possible for the Dato roll to break the 6m barrier?

It was FEU Aprilen Laudencia and Charie Catahan of UP 1-2 finish last year at the UAAP that ended the reign of DLSU Phoebe Que as UAAP Champion. Catahan however who sports the better PB of 1.60m is expected to claim the title this year. Expected to collect a medal as well is heptathlete Avegail Dizon of FEU.