Posted on November 15, 2011 by pinoyhalfmiler

The Philippines suffered setbacks one after the other during Day 4 of SEA Games competition (Day 3 of Atheltics) which saw the end of fantastic rule of two throwing greats of the country, a neophyte’s jitters, and a veteran champion running in an unfamiliar and unwinnable event for her talent.

Two Pinoys defended their SEA Games titles but yielded to younger opponents.  They are  National record holders Danilo Fresnido (Javelin) and Arniel Ferrera (Hammer Throw), who has collectively won 7 golds and 1 silver since 2003.

Women’s marathon defending champion Jho Ann Banayag answered her country’s call for her services at the 5,000m run, an event which is outside of her comfort zone, and failed miserably as expected.

Men’s Javelin Throw: Three time SEA Games titlist Danilo Fresnido settled  for bronze medal  with a heave of 66.27m.  Vietnam’s Nguyen Truong Gian ruled the event with a 69.07 performance.  Fresnido won the gold in ‘03,05 and ’09, plus the silver in 2007.

Men’s 4x400m relay: Top ranked but inexperienced Philippine 4x400m  relay team yielded the gold  and settled for silver medal, after a surprising run by Malaysia.  The silver was the first relay medal of the country since 2007, when Ernie Candelario anchored a bronze winning team.  Candelario, incidentally, is the coach of the young relay team of Archand Christian Bagsit, Julius Nierras, Edgardo Alejan Jr and Junrey Bano.  Bagsit and Alejan are both in their first international exposure. 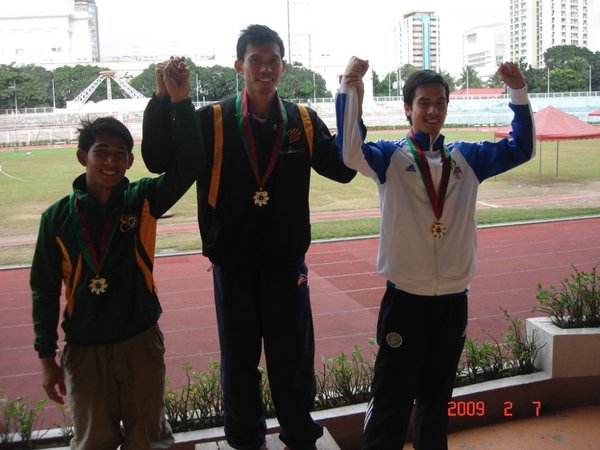 Candelario, incidentally is the

Women’s 5,000m: Defending marathon champion Jho-Ann Banayag struggled all race at the 5,000m final and finished at 6th place with a timeof 17:46.60.  It’s still a puzzle why she was entered in the event considering that she is nowehre near the SEA Toplist as of October 31 of  this year.  Indonesia’s Triyaningsih ruled the event with a time of 16:06.37.

Men’s 400m hurdles: In what has been the only positive note for the Philippine Athletics for  the day, Junrey Bano burned the track as he topped his heats in the preliminaries of the 400m LH with a time of 52.51s.  Junrey also boasts of the best time among all finals qualifiers.  The final round is scheduled today 5:30pm Indonesian time.

3 Responses to SEA Games Day 4: End of the run